It is a common psychological trait among blog-writers and Internet authors to assume that, not only are you unbelievably witty and insightful, but that everybody is interested and/or/in paying attention to you. There is a theory about people on the Internet which goes something like this:

Unbelievably clean. It doesn’t even smell like the Tube.

Just like it’s easier to sound more intelligent in a text than it is when confronted with actual, spontaneous human interaction, it’s easy to come across as quick-witted when you have time to Think Before You Say. Perhaps the egotism of online geeks (myself enthusiastically and unashamedly included) is rooted in the comparative glory of ‘viewer counts’ compared to being largely overlooked by other people in the street; I don’t know. My greatest claim to fame on the ‘Net is a photo of me punching myself in the face.

Not so for a Westerner in Namyangju, it appears. 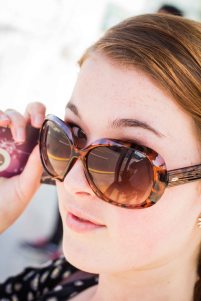 Being stared at is something we have become accustomed to, as Namyangju is  outside the metropolitan multilingual hub of Seoul and, while there are a damn sight more Koreans who speak English than vice versa in London, the language/cultural barrier is akin to the Berlin Wall. We can mumble hello, thank you, goodbye, where is the toilet but that’s about it in terms of social interaction. Being 6’2 (as my doctor tells me I apparently am, he said smugly despite not knowing it at the age of 23), Caucasian and somewhat bearded is enough to warrant people actually turning on the spot to stare at the back of my unkempt head; in Meg’s case we are told that having naturally wavy hair and sluttishly displaying one’s shoulders to the sun results in envious/outraged stares. 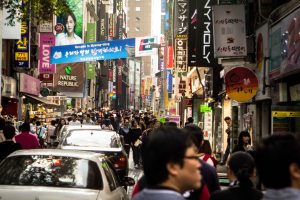 We’re lucky, apparently – while waiting to be called to our table at a restaurant in Itaewon we got talking with an African-American couple, the Williams, who have been living in the same area of Seoul for over a year but are still stared at every single day by the same neighbours, whereas we only receive passing glances for the most part. To quote Mr. Williams: ‘I mean, come on guys – we saw you yesterday, and the day before, and the day before – you know us by now!’

On Chuseok, pretty much the whole undercity is deserted – cue waving arms and running.

Not to say this even slightly prevents our flagrant and disgusting displays of Englishness wherever we go. I suspect I blind people in direct sunlight with my translucent skin. 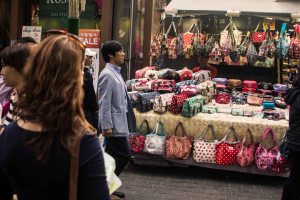 I realise that the last few posts have become less a recounting of my experiences and more attempts at profound introspection, and I apologise to family members for this filial transgression. To summarise: we have gone for dinner at aforementioned furniture dealer family’s house and been subjected to smartphone photoshoots avec Chuseok fireworks; we have explored a (real) consumer heart of Seoul, Myeongdong; I have been subjected to round 2 of Boot Camp on the otherwise scenic lake and returned at night tonight for photos and carnivorous insects; we have raided the ‘sample electronics’ sale at Emart and wandered off with an otherwise pristine Canon photo printer for £15 with no small amount of pride.

Still ‘sploring at every opportunity, and picking up around 1 word a week. Slow progress, but on the bright side I now know the words for ‘(restaurant)bill’ – kyesanso – and ‘delicious’ – mashisseyo! Almost as helpful as the oft-used French expression je suis un papillon.

Tomorrow holds another venture into Seoul to try our hands at Namdaemun Market, which may or may not still be entirely closed for Chuseok. If not, I fully intend to smear the windows of as many camera shops as is physically possible, despite the fact that, were I even remotely able to afford said equipment, it would be ethically(/legally/medically) better-spent on repaying the queue of financial favours which got me to this point. One way or another, it should be an exercise in cultural wonderment and disappointment. 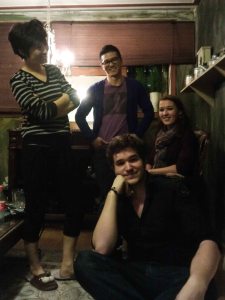 Courtesy of Mr. Ryu’s phone. Just to prove that we are capable of socialising.

3 Comments to “Tourism and Voyeurism”