Our time on the western coast of Cebu Island had been one of sun, sea and slightly soggily sandy sandals, but it was time for a change – a decision we apparently shared with the ever-indecisive Pacific weather.

When we finally boarded the bus from Badian to Cebu City, the ground was scorched by midday sun. Twenty minutes into the journey, someone apparently annoyed the local gods and the entire sky dropped on our heads. Sheets of horizontal rain pounded the passengers’ faces while the conductor fought with rusted window latches; meanwhile, I endeavoured to take photos with rain filling my eyes, camera and undergarments. 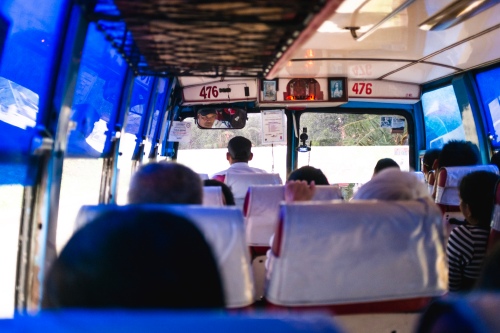 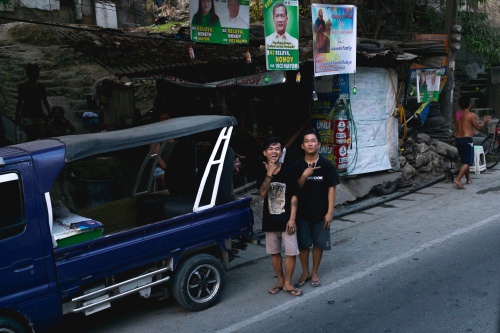 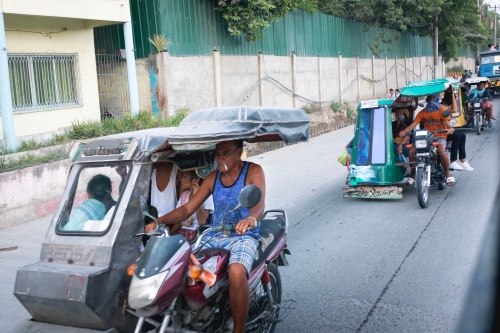 After a few howling hours of misted mountains and tropical downpour, we emerged on the other side of the island into Talisay, a city area latched onto the outskirts of Cebu City itself. Our intention was to spend a few spare days with a base in the city to allow Meg the opportunity to get her rock-climbing fix before heading to our next destination, the climbing haven of Cantabaco – though the weather was already starting to raise concerns about the feasibility of doing so.

Talisay was something of an in-country culture shock for us. After a few weeks of roaming the brilliant beaches and dense jungles of the Philippine countryside, we were left reeling when the bus dropped us at the side of a screaming highway in a densely-packed urban landscape. Unfortunately, we were also left a few kilometres from our hotel with heavy bags and tired bodies – and a misread maps app led me to believe it was too close to bother getting a (presumably overpriced) taxi. Thirty minutes later we both agreed that 200 pesos was perfectly adequate for such a journey, but we’d already walked two-thirds of it and were too stubborn to give in.

Having survived enthusiastic motorcyclists, bloody-minded jeepneys and a number of spontaneously non-existent pavements, we finally dropped our luggage at the hotel and gave in to the allure of a Korean restaurant in a nearby mall. We were dusty, bedraggled, missing the cerulean beauty of Badian and ready to fall over on the bed in preparation of Meg’s climbing expedition the following day. This was the plan.

As we left the mall, we came up against a wall of people looking out at some pretty nasty-looking rain. We were convinced in our stubborn Englishness that a little drizzle wasn’t going to keep us from getting back to our hotel just across the street, and strode into the road – into two solid feet of flowing water that hadn’t been there an hour before. 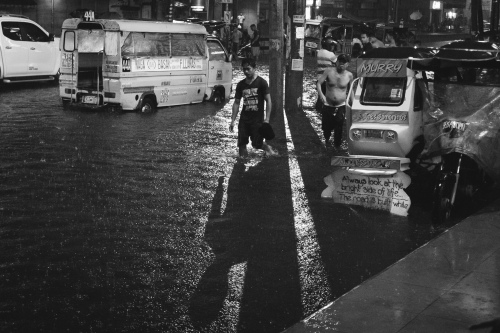 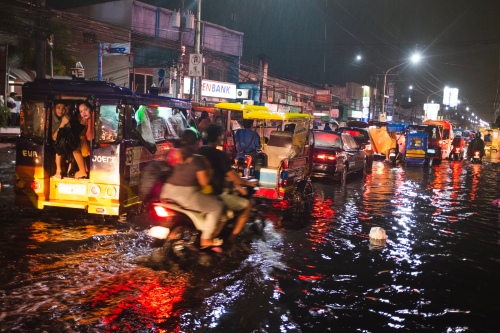 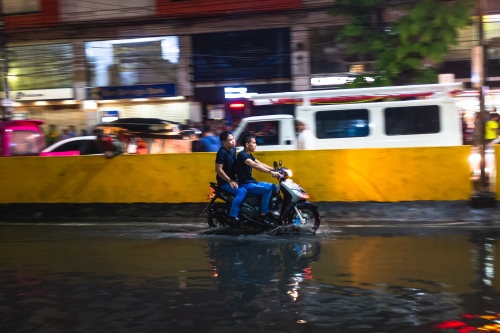 The road was a black river, knee-deep at points and full of standstill, vaguely bored traffic. Meanwhile, the two palest people on the street were overjoyed to find purpose in the pack-a-macs they’d brought with them and waded happily onto the scene, taking photos and giving ironic thumbs-up to slightly-amused jeepney passengers. We had a great time until something unidentifiable brushed past my leg, after which point we stuck to high ground. 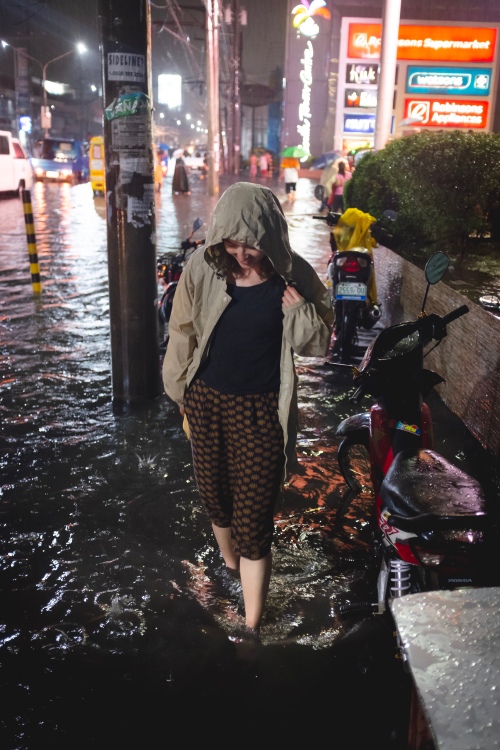 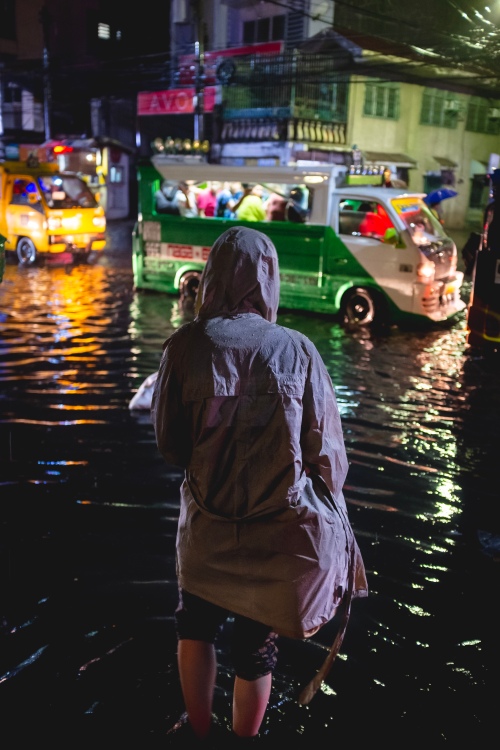 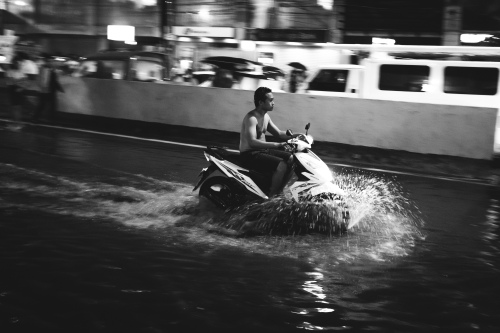 One of the additional effects of this torrent, however, is that it almost certainly meant that the climbing trip wasn’t going to happen. Despite my occasionally simian behaviour, I’m not yet much of a climber – but the gecko-like Meg was mortified. As such, we allowed ourself a lie-in with the promise that we’d find an indoor climbing gym elsewhere in the city; when we woke up to glorious sunshine and a bone-dry city, it became apparent that we should never make assumptions about weather in the Philippines.

Before: Cebu under water, 10pm.

After: Cebu, the driest city I’ve ever seen, 10am. 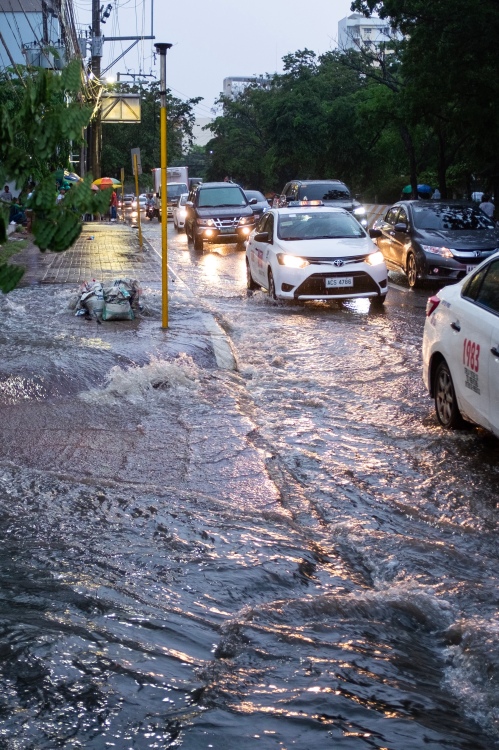 The next few days were devoted to attacking the climbing wall (for Meg) or wandering vaguely around Cebu City trying to write this blog. The daily downchucks of torrential rain made any ambitious adventures unlikely, and we were whiling away the time before flying to our last destination in the country: the lauded beach paradise of Boracay. 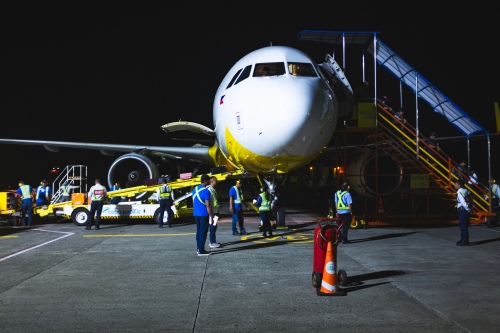