Jeju (1): Visiting the Island of the Gods

Blowing the dust off the blog…

It’s been [INSERT QUANTITY OF MONTHS] since the last update, for which I blame (if not my own mutant ability to procrastinate) the unbelievable cooking-temperature summer which Koreans deal with so casually – while I spend most of my day peeling myself off chairs and pavements. 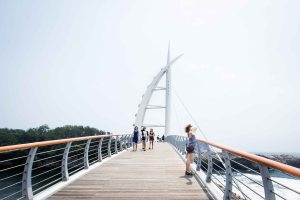 I am the unconventional proud owner of a coveted smartphone courtesy of the stupefyingly generous Hailey, which means that I can join the masses in zombified silence in public spaces. I’ve already unlocked the secret characters in Temple Run – don’t pretend you’re not jealous.

An upside of having such an unnecessarily advance device is that now I can surprise myself on a daily basis with my Big Day countdown app, which currently reads 28 days. That makes exactly three weeks before I’m back in the greenish-grey sanity of England, and ‘conflicted’ is the word of the day. I would be lying to say that I’m anything less than hyperactive at the thought of going home – but I’m starting to notice the things which won’t actually be there when I leave Korea. But sadness can wait for a later blog! It’s taken me long enough to post this bugger. 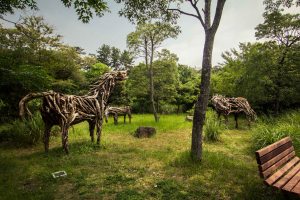 For the majority of Koreans, holidays are often spent within Korea itself; when you’re surrounded by either ocean or possibly-psychotic Communists your options are, alas, limited. Either families visit each other in Busan/Seoul/Gwangju/Gyeongju etc. etc., or visit the beaches in the neighbouring province of Gangwon-do – but the sought-after holiday spot (and, according to my classes, ‘abroad’ destination) is Jeju Island, a small-ish dot on the Korean map stranded in the southern sea. 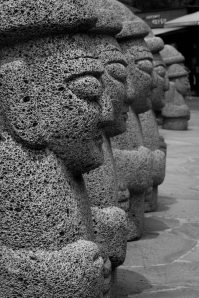 Historically a traditional honeymoon spot, ‘the Hawaii of the Orients’ (so I have been told) is chocka with exciting geography, history, exhibits, weather and food. Unfortunately our holiday coincided with the single most popular time of year to visit, so much of this was seen between shoulderblades.

You know what? I retract that last passive-aggressive statement: what we expected was to only see sights over the tops of crowds. In fact, we (mostly) had ample room to travel. 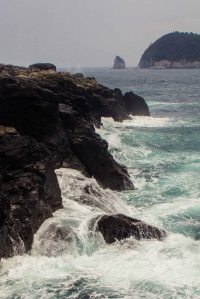 Jeju Island (roughly translated as ‘Island of the Gods’) is predominately divided between two places-to-be: Jeju City, next door to the airport and bustling with hustle and shops and nightclubs and other familiar things – the alternative being Seogwipo, a substantially smaller harbour-town with more countryside than cityscape to offer. We chose the latter in an optimistic attempt to minimise forced human interaction for a few days.

Seogwipo was a good bet. The city is thriving with markets, vegetation and a staggering number of restaurants of all different flavours. Typically, we managed to repeat-visit two places in the five days we had, but hell – it was a holiday.

Part of our reasoning for picking Seogwipo lay in the options to explore the area – while Jeju City has plenty of museums and hilarious sculpture parks (which I shall address momentarily), we wanted to see the actual, breathing volcanicity of the island itself. Our choices were: 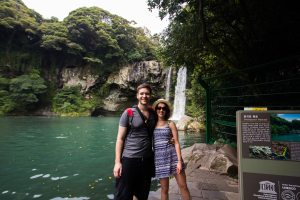 Cheonjiyeon Waterfall – a very pretty spot, but ill-chosen for the first visit; the peak season was particularly self-evident as coaches spilled multitudes into the small canyon hiding the waterfall itself. Never have I wished to join ducks swimming so much; Jeju is even more equilateral than Seoul or even Daegu and the heat can be awesome. As in, the actual definition.

Seogwipo – the city itself, although built on a bastard hill, has something to see at each level. On top of the hill (ie. our hotel) you can gorge yourself on any kind of conceivable food (we had the best Dak Galbi thus far tasted in Korea. Twice.) Further down, you can find arts & crafts, music venues, and street sellers such as a fantastically bohemian Nepalese couple we met at a street-stall; I am now the thoroughly proud owner of a hand-made bansuri flute which, while distinctly un-Korean, is possibly my favourite souvenir thus far purchased here. 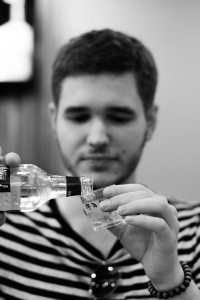 On our very first night there, we encountered a lovely, if initially odd, gentleman by the name of Mr. Kim. We went on a merry adventure about the city with him as our guide, clambering over coastal rocks in the dying light and drinking into merriment; apparently just having friends for the evening made him ‘very, very happy’, which was only a little heartbreaking for us when we couldn’t find him afterwards…